Aertv is changing. From 20th March 2014, account holders will be limited to 10 minutes of free TV per day on all devices. When you sign up to Aertv Plus for €5.99 you will get unlimited streaming of Aertv Plus channels. If you are an Aertv Plus or Platinum subscriber, this change does not affect you.

Aertv SportsLive and our own produced live content will remain FREE for all users on all devices.

Below we explain why we needed to change, how we arrived at this decision and how it affects you.

At Aertv, we are constantly trying to do more.  More live streams, more sports, and more channels available on more devices.  In order for us to continue to expand and to invest in a better service for you, we have taken the decision to charge a small fee for our services.  In turn, we are reducing  advertising, offering more channels and offering those channels in higher definition so that you can watch them on your TV as well as your laptop, PC or mobile device. There is no contract and no commitment.

We hope that you support us with our new structure – it’s just €5.99 per month for 24 channels on Aertv Plus. Save on expensive TV subscriptions and Sign up to Aertv Plus today!

The Aertv community has been very loyal and to reward that loyalty we want to offer you the first month free on Aertv Plus. 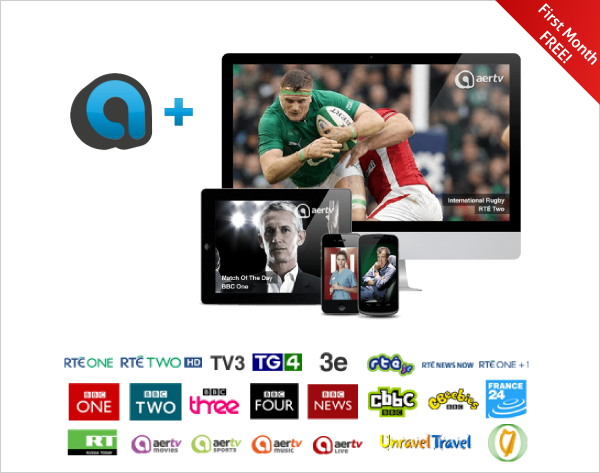 In the coming days, the iPhone and iPad apps will be updated to be accessed the same way as the website.  They will be free for 10 minutes per day and be included in the 5.99/month Aertv Plus package with the first month free.

Why did we decide to change?

This change will allow us to innovate faster (launch android and smart TV apps) and provide you an even better service and more channels.

Aertv, powered by Magnet, has been streaming live Irish TV channels over broadband for more than two years now. We have added other proprietary channels like Aertv Music, Sports and Movies. We have carried live webcasts of more than 400 events and helped to develop and distribute innovative new channels such as The Gathering and Unravel Travel.

During this time we have also developed Apps for iPhone/iPad/iPod and instituted streaming to adapt to all devices no matter what kind of broadband connection you are on. Finally, we recently introduced Aertv SportsLive, an innovative platform which will enable any size organization to access its audience anywhere in the world. All of this has been done without any charge to the public.

We have debated and thought carefully about this. The reality is that the cost of supporting free TV simply is not sustainable in the long run.

We hope you continue to enjoy Aertv and that you help us to make it the best TV service in Ireland. Aertv is the only TV service in the market offering a full range of Irish channels in one place on your mobile, tablet, or PC.