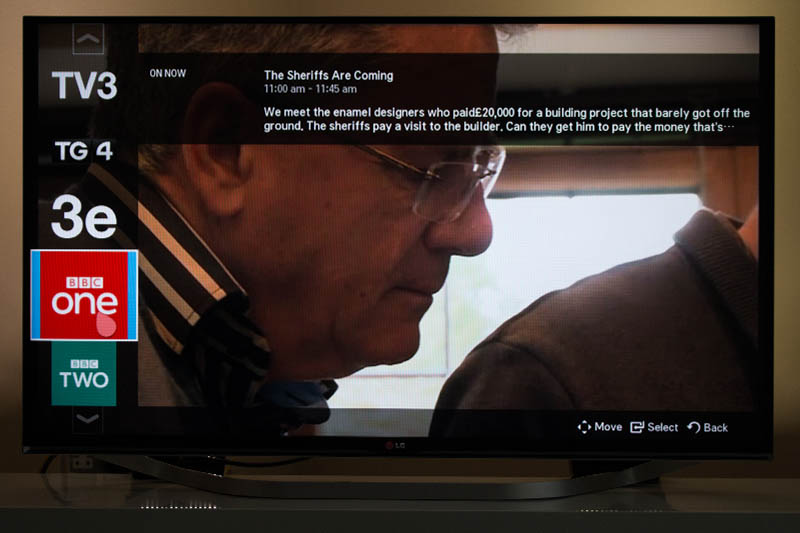 BBC One live on the Aertv LG Smart TV App

LG Electronics Inc. (LG) today announced an exclusive partnership with Aertv, Ireland’s leading platform for streaming TV on-the-go. The partnership will see the Aertv platform available on the big screen for the first time, feeding the demand for large-screen and lounge viewing based on 88 per cent of TV consumption still being viewed in the home*.

LG Smart TV owners will have access to a range of 19 quality TV channels, including the Irish Broadcast and BBC channels, via a new Aertv app available now from the LG App Store [http://ie.lgappstv.com/]. Previously accessible via smartphones, tablets and computers, the Aertv TV app will be available on LG’s Smart TVs including the award winning webOS platform which offers a simple, user-friendly interface and easy navigation.

Subscription to all 19 channels is available through the Aertv Plus package, which costs just €5.99 per month, and with no contract required users are given the freedom to cancel their subscription at any time.

Aertv Plus is Aertv’s most popular subscription package and allows for unlimited live viewing, which many will find useful for the upcoming Champions League and Six Nations games. The streaming service, which won a Digital Media Award for Best in IT & Telecommunications, is owned by Dublin-based cloud telecoms provider Magnet.ie. Magnet Broadband customers can enjoy the same bundle with Aertv at a cheaper price of just €4.99 per month.

Karen Howley, Head of Aertv, comments “The Irish market is becoming more comfortable with cross-platform viewing and Aertv is delighted to help drive this trend by partnering with LG and releasing our first Smart TV app”.

Aertv App is also available on iOS and Android which means LG and Aertv let you watch TV at home and on the go.

Darren Petersen, Senior Content & Services Manager for LG Smart TV, comments “LG is very excited to be partnering with Aertv, to offer Irish consumers the most seamless and innovative way to watch pay TV in Ireland. Whilst streaming content on portable devices can offer extra convenience; great TV programmes and live sports are best enjoyed on the biggest and best screen in the house.”

*Source: Aertv Customer Survey (Sep, 2014)
While mobile video consumption is on the rise, 88% of viewing still happens in the home with the sitting room being the most popular room followed by the bedroom and kitchen.

Leave a Reply to josh

How to watch Aertv on LG Smart TVs

We are super excited to have an Aertv App for LG Smart TVs. Find out how to get the Aertv...